The U.S. Department of Homeland Security (DHS) recently announced it will provide $20 million over five years to fund the Coastal Resilience Center of Excellence (COE) at UNC-Chapel Hill. That’s a good thing for people in coastal areas who each year must cope with hurricanes, erosion, flooding, and storm surge. 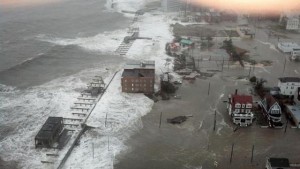 The new grant acknowledges the effectiveness of a longtime partnership between the Coastal Resilience COE (formerly the Coastal Hazards Center of Excellence) and RENCI. For more than five years, Brian Blanton, RENCI’s director of environmental programs and a coastal oceanographer, has worked closely with Rick Luettich, lead investigator for the Coastal Resilience COE and director of UNC’s Institute of Marine Sciences, to enhance the ADCIRC storm surge modeling system and put it to use as a tool to help coastal communities understand, predict, and mitigate the impacts of coastal storms.

The collaboration is a perfect example of university researchers with different, but complementary, backgrounds working together to have a long-lasting impact on a problem that affects human lives, businesses and homes, infrastructure, tourism, and coastal ecosystems.

ADCIRC, a storm surge and wind wave modeling system used to predict flooding caused by tropical and extra-tropical storms, has been a key tool in coastal resilience efforts for many years. Through collaborations involving RENCI, the UNC COE, and other partners, ADCIRC has been coupled with several meteorological forecast models and set up to provide forecasts of coastal storm surge and waves conditions. This tool, called the ADCIRC Surge Guidance System (ASGS), uses the power of RENCI supercomputers, to produce high resolution coastal forecasts at least twice a day and more often when a tropical storm or hurricane threatens the U.S. East or Gulf coast.

With hurricane season about to start, the ADCIRC/ASGS capability alone makes the Coastal Resilience COE a good investment. However, the COE’s coalition of university and private sector partners, federal agencies, first responders, and other research centers has a much more expansive research portfolio that includes coastal hazards modeling, disaster recovery and hazard mitigation planning, risk communication, and coastal infrastructure resilience.

The center also has a strong education component, including the development and delivery of courses in coastal/computational engineering, disaster science and management, and related disciplines. Many courses are offered at Minority Serving Institutions within the COE’s network of partner institutions.

Congratulations to our friends and colleagues at the Coastal Resilience COE on the new five-year DHS award that will translate research to end users who can then use that knowledge to address real-world problems and protect vulnerable coastlines and coastal populations.

We at RENCI look forward to continuing a long and productive relationship.