Pearl Hacks draws female coders from across the nation

“Every single one of you are makers.”

These words from Dona Sarkar kicked off UNC Chapel Hill’s recent Pearl Hacks event. Sarkar is an engineer manager at Microsoft, author, and fashion designer, and this past weekend she was in Chapel Hill inspiring an audience of over 600 high school and college-age women gathered to create through hacking.

As hackathons grow in popularity, Pearl Hacks is unique in that it specifically encourages women to become more involved in technology, a field in which they are woefully underrepresented or even discouraged from participation. Consider the fact that, according to Girls Who Code, women today represent 12 percent of all computer science graduates, while in 1984 they represented 37 percent, and the need for events such as Pearl Hacks becomes very real.

According to Pearl Hacks organizers, “hacking…[is] breaking your ideas out of the confines of your mind and learning how to make them a reality.” Their two-day event open to women across the U.S. is structured to facilitate this process even for the uninitiated. The first morning and afternoon offer a variety of workshops organized from beginner to more advanced levels.

After dinner on the first day, the real work begins. With the help of volunteer mentors, participants form teams, brainstorm, and create a functional product using coding and sometimes hardware. This all happens before lunch on the second day, when teams gather to demo their results in competition for an array of prizes offered by local sponsors. 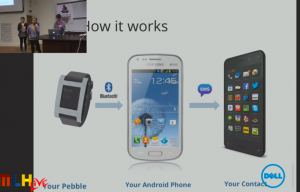 First place at this year’s event went to the creators of HelpMe, an android app that syncs with the Pebble watch to allow users to notify their emergency contact if they find themselves in a dangerous situation. While pressing a button on the Pebble watch can trigger the HelpMe notification, the notification can also be triggered by an accelerometer that senses free fall motion. This is a particularly handy feature for the elderly, who may fall and be unable to get up without help. The first place winners received all expense paid trips to Global Hackathon Seoul in South Korea and Dell Android tablets.

Other prizes were awarded for creations as varied as a game to teach students about sexual health, an app to allow young women going out in groups to keep tabs on each other for safety, and a league watch app for following the latest scores.

The creative and useful final projects created by Pearl Hacks teams, combined with their enthusiasm for learning, drove home another key point made by Sarkar in her speech:

“The [next generation of tech] is going to be led by the people in this room.”

Interested in attending a hackathon and can’t wait until next year’s Pearl Hacks? UNC Chapel Hill will be hosting a co-ed hackathon, HackNC, October 25-26. 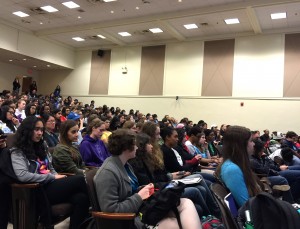 An eager audience awaits the start of Dona Sarkar’s keynote at Pearl Hacks. 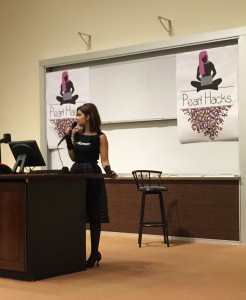 Dona Sarkar addresses the crowd with advice on how women can move to the next level in tech. 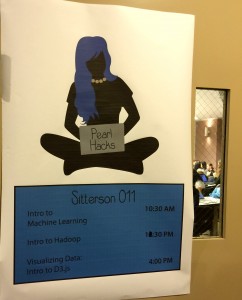 One of many rooms filled with eager learners. 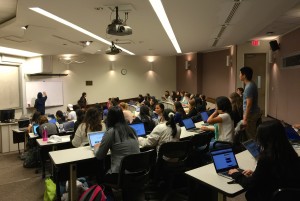 For some, the workshop portion of the day gets started with a Machine Learning workshop. 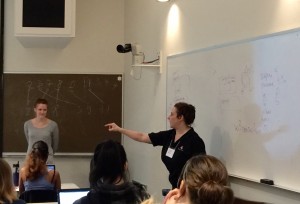 Representatives from RedHat lead an “Introduction to HTML” workshop. 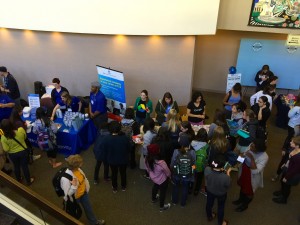 Participants were able to mix with sponsors from major tech companies during their lunch hour.