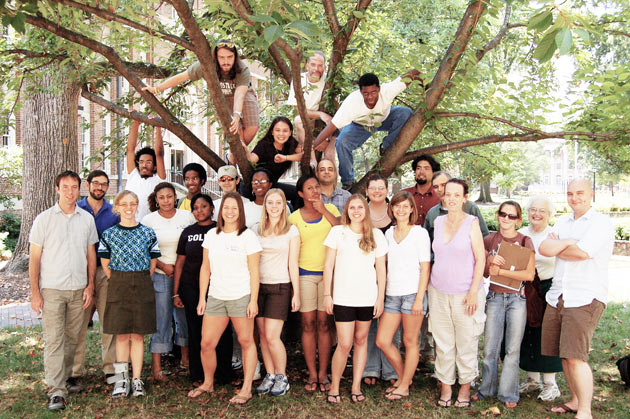 Students from across the state took part in BotCamp 2009 at the University of North Carolina at Chapel Hill June 19 and July 24-25. BotCamp offered a new innovative curriculum, called Bot 2.0, designed to educate, recruit and retain non-traditional students in the study of botanical science.

Bot 2.0 features a curriculum that combines botany, environmental conservation, the use of social networking technologies and metadata literacy. Funded by the National Science Foundation, Bot 2.0 is a collaboration involving RENCI, the Metadata Research Center at UNC’s School of Information and Library Science (SILS), the North Carolina Botanical Garden (NCBG), the UNC Herbarium and UNC Information Technology Services (ITS). Jane Greenberg, Francis Carroll McColl term professor and director of the Metadata Research Center, and Alan Weakley, curator of the UNC Herbarium, lead the project.

RENCI managed BOT 2.0’s technology, which is modeled on the concept of a memex, a theoretical memory augmentation framework that allows users to share, link, correlate and re-find digital information through the application of structured metadata and collaborative tagging. Michael Shoffner, the project’s technology architect and a RENCI advanced software developer, developed a “cloud memex” using social media services such as Facebook and Flickr and mobile phone cameras. His objective interfaces and interaction techniques  that were familiar to the students and would be simple for educators to learn.

“We worked with the faculty team from the beginning to craft the proposal, selected computing technology that would advance the project’s research agenda, and helped pull it all together,” said Shoffner. “Working with these researchers, who are leaders in metadata and botany, has been an amazing experience.”

Eighteen students participated in this year’s BotCamp. They were selected from Alamance Community College, North Carolina A&T University, North Carolina Central University, North Carolina State University and UNC-Chapel Hill. The students’ activities included a tour of SILS with an overview of the field of library information science and visits to NCBG and Battle Park, where they learned about plant identification, folksonomies (user-defined classification systems based on tagging) and metadata systems for classification. The students also participated in competitions, such as discovering the most interesting tree bark and describing a plant using “characters.” Characters are what botanists call the attributes of a plant, such as “bark features,” “twig features,” “leaf type,” etc.

“We had a number of hands-on activities that encouraged students to observe plant characteristics and approach plant identification like biologists while not getting too wrapped up in the formal taxonomic language,” said Greenberg. “The students also had the opportunity to use our Facebook and Flickr sites, and our blog so they could share what they learned with others using the same social networking tools they use every day.”