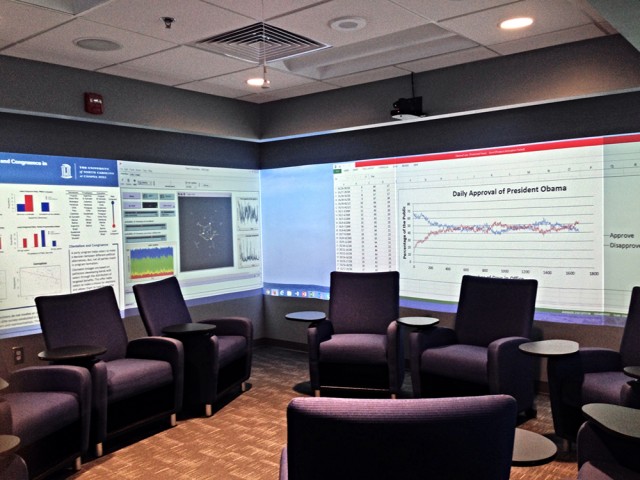 The SCR provides an immersive 360-degree view of any visual content, allowing users to interact with and explore data in groups. The original SCR, built in 2007, runs on a Windows desktop and uses three projectors per wall (12 total) to achieve the 360-degree experience. The room can visualize scientific data set at 9.5 million pixels.  It also includes a system capable of tracking up to 15 people or resources in real time. The SCR’s many uses have included image analysis for cancer researchers at UNC’s School of Medicine as well as class projects and presentations for courses in computer science, English, art, and law.

The UNC Chapel Hill Odum Institute for Research in Social Science recently opened its version of the SCR, the Odum Institute Social Computing Room, at their Davis Library location. RENCI assisted in the technical design and implementation of the room, helping to install all the hardware, baseline operating system, and projectors and supported part of the cost of outfitting the room.

Odum Institute Director Tom Carsey said that plans for the room began as soon as the Institute moved its offices to Davis Library. Odum administrators wanted to build the room to provide a space for interactive learning and presentation for the UNC community that was centrally located and easily accessible. Paul Mihas, a social research associate at Odum, said that any UNC student, faculty, or staff member can reserve the room from 9 a.m. to 5 p.m. Monday through Friday.

“The room is designed to serve many needs,” said Carsey. “It can be used as a classroom, for digital poster displays, as a workspace for individual scholars or teams of scholars, focus groups, video conferencing, whatever scholars at UNC might imagine.”

North Carolina State University is in the process of opening a similar room, which will be located on the second floor of the D.H. Hill Library on the North Campus. This version of the SCR will be called the Visualization Studio and is set to open Monday, March 17.

According to Steven Morris, the head of NC State’s Digital Library Initiative department, planning for the Studio began over a year ago after library staff members began collaborating with RENCI researchers and experienced using the SCR and its the features. RENCI technical staff developed plans for the physical space and helped install the technology needed to run the room, and, like the Odum room, assisted with the cost of implementation.

RENCI experts worked closely with NC State library staff on improving the Studio’s design from the original room’s template. Additional enhancements will include a removable podium with a touchscreen controller and wireless keyboard and mouse.

“We envision this as a way for groups meeting for projects to improve their user experience, since the room also has laptop connectivity controlled from the touch screen,” said NC State Academic Technologies Librarian Brian Norberg. “There is a desktop computer in the room just like the one at RENCI, but three of the walls also have places to plug in laptops and control the visuals from there, an idea which actually came from the RENCI experts we talked to.”

N.C. State Libraries Director of Communication Strategy David Hiscoe said the Studio will eventually be open to any NC State student, professor or researcher to work on group projects and presentations, conduct interactive lessons, and analyze data or imagery. Already, library staff has held discussions with faculty from the English department about using the studio to visually explore the ideas discussed in classes. Faculty from the College of Design and the College of Humanities and Social Sciences have also expressed interest in the Studio, and library staff will use the Studio for instruction sessions and technology workshops.

“Like the newly opened James B. Hunt Jr. Library, this room will help NC State continue in its goal of becoming a center of excellence in visualization technologies,” said Hiscoe.

Carsey also said that the staff at Odum is looking forward to exploring the potential opportunities of their Social Computing Room.

“We expect that researchers will imagine new ways to use the space that have not occurred to us,” he said. “We take the view that if you provide powerful tools to bright people, they will find ways to use those tools in productive and creative ways that were not originally anticipated.”

Another SCR is planned for the RENCI engagement center in the TelCom building at Duke University. RENCI staff have been working with staff from Duke’s Office of Information Technology on redesigning the engagement center space to accommodate a next generation SCR.  RENCI also plans to hire humanities faculty liaison, who will provide help and guidance to humanities faculty interested in using the SCRs at UNC Chapel Hill, NC State and Duke.

Please email scr-help@renci.org if you are interested in reserving a RENCI Social Computing Room.