Scientists can’t control coastal flooding caused by storm surge. But they can help government agencies and the public understand the risks from storm surge and wind waves in vulnerable areas like North Carolina’s Outer Banks.

At RENCI, Senior Scientist and Oceanographer Brian Blanton has spent the last three years working with RENCI computing and visualization specialists, UNC’s Institute of Marine Sciences, North Carolina’s Division of Emergency Management and the Federal Emergency Management Agency (FEMA) to model the effects of storm surge caused by tropical and extratropical storms in more detail than ever before possible.

After thousands of model runs using millions of compute cycles on RENCI supercomputers, FEMA and the state have a more accurate and detailed picture of the flooding risk due to storm surge in North Carolina and the Chesapeake and Delaware Bays, thanks in part to RENCI’s work.

Surge occurs when a storm’s winds push water toward land. The water mass encounters shallower depths as it moves ashore and thus must increase in height. The higher the surge level, the greater the risk for flooding, as more water pushes inland.   Along with storm surge, large wind waves can damage coastal dunes, property, and roads. 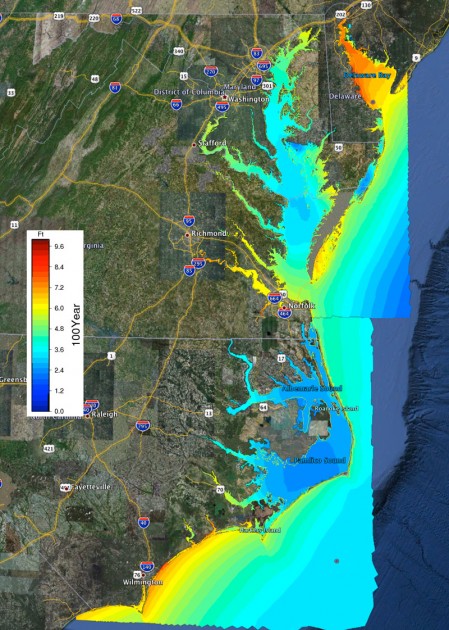 (Click image for larger version) A visual depiction of water levels from coastal storm surge and waves that have a 1 percent annual probability of occurring (called the 100 year flood level) in North Carolina (part of FEMA’s Region 4) and Virginia, Maryland and Delaware (FEMA Region 3). ,Water levels are shown in feet, with higher levels in red, orange and yellow. Image credit: Howard Lander, RENCI

RENCI began working with North Carolina’s Division of Emergency Management in 2007 to model coastal flood hazard risks as part of the state’s Floodplain Mapping Program, a federally mandated program to update coastal floodplain maps. The new maps will serve as a reference for state and local officials who develop coastal management plans, and for FEMA in determining rates for its National Flood Insurance Program.

“Our output is their input into another modeling process that generates additional data, which is then used to draw the floodplain maps,” explained Blanton.  “We had the computing power and the expertise to do this work and the fact that we are scientists means we were very interested in studying the data and understanding what the data tells us about flood risks.”

Topographic data for the computer models came from Light Detection and Ranging (LIDAR) data obtained from flyovers of the region in planes equipped with optical remote sensing technology.  The scientists then merged this land elevation data with ocean depth data from the National Oceanic and Atmospheric Administration, the U.S. Army Corps of Engineers, and the U.S. Geological Survey to produce a Digital Elevation Model (DEM) of coastal areas, both above and below the water.  The project also used data from past hurricanes and extratropical storms to generate simulated storms and compute probable flooding scenarios.  The system couples two ocean models to produce its results: ADCIRC, a surge model developed at UNC’s Institute of Marine Sciences, and SWAN, a model used to compute random, wind-driven waves in coastal regions.

The ADCIRC/SWAN modeling system shows how storm surge and waves are likely to flow inland under different storm conditions and resolves detail down to about 200 meters.  RENCI’s modeling work in North Carolina also resulted in a grant from FEMA through the U.S. Army Corps of Engineers to produce flood risk models for FEMA’s Region 3, which starts at the North Carolina/Virginia border and runs north to Delaware Bay, encompassing the Chesapeake Bay.

“The (Army Corps of Engineers) Field Research Facility in Duck chose to use RENCI for the Region 3 work partially based on the fact that RENCI was involved with the North Carolina study,” said Robin Danforth, manager of the Coastal Analysis and Mapping Study for FEMA Region 3. “I highly respect the work that’s been done by Brian Blanton and his team at RENCI.”

Models have many uses

Although modeling for the floodplain mapping projects is complete, RENCI continues to run its ADCIRC/SWAN modeling system during hurricane season, producing outputs that show projected water level and wave height. As Hurricane Irene approached the U.S. last September, RENCI-produced models were used by the National Weather Service to help produce surge advisories, by coastal emergency managers in North Carolina, and by federal agencies, including U.S. Coast Guard officials, who moved their Portsmouth, VA, command center based on an ADCIRC model of predicted flooding in the area that was computed at RENCI.

The NC Emergency Management Division also funds Blanton to use the same modeling system to understand how flooding risks could change under sea level rise scenarios. That work uses data on probable hurricanes that could head toward North Carolina over the next 100 years and generates probable hurricane and severe storm events under different conditions that could occur because of climate change, such as higher sea levels and changing storm intensities and frequencies.

The end product of that effort, said Blanton, will be a scientific evaluation of the risk of living on the coast—whether economic, risk to infrastructure or risk to lives—under changed conditions.

“We hope to provide scientific data on the flood hazard risk and the uncertainty that goes along with that data, because the uncertainty can be quite high when you’re talking about a 100-year future climate,” said Blanton. “We hope our work will inform future policy discussions.”