The judge, jury, witnesses and lawyers were all in the courtroom on September 25 for a mock trial conducted by University of North Carolina School of Law students and faculty. But for the first time, attendance in the courtroom didn’t require being in the same physical location.

Welcome to the first mock trial in the virtual world of Second Life, the brain child of UNC law student Bryan Byerly brought to life through a collaboration involving RENCI, law students and faculty, the UNC School of Law technology office and UNC Information Technology Services (ITS) Teaching and Learning division.

“Just like a regular mock trial, they will put witnesses on in front of a jury, follow rules of evidence, conduct examinations and present opening and closing arguments to a jury,” said assistant law professor Richard Myers a few weeks before the trial. “The difference is that it will all be done in a computer-based simulated environment. No one has conducted a mock trial before in Second Life, so we’re excited to see how it will work.”

Myers coordinates the law school’s mock trial programs, which are used to give law students a taste of the courtroom experience and help them develop courtroom skills. Law students must participate in mock trials, but Byerly, who previously worked as a RENCI software developer, wanted to try something different after seeing UNC’s Second Life island in RENCI’s Social Computing Room at UNC’s ITS Manning building.

The Social Computing Room (SCR) provides a 360-degree desktop that projects floor-to-ceiling on all four walls. The room was conceived by Ray Idaszak, director of visualization and collaborative environments at RENCI, and designed and implemented by Warren Ginn, a RENCI senior research industrial designer. The UNC Second Life island, a virtual campus in the 3D, interactive virtual world that boasts millions of users, was designed by a team led by Kathy Kyzer of UNC ITS Teaching and Learning and adapted for the Social Computing Room by RENCI’s Mike Conway, a systems specialist, and David Borland, a senior visualization researcher.

“When I worked at RENCI, I had seen speech introduced into Second Life, the UNC and RENCI islands developed in Second Life, and the development of RENCI’s Social Computing Room that literally puts you in the middle of your data,” recalled Byerly, now a third-year law student. “In law school, I’ve been a part of UNC’s Broun National Trial Team, which competes in regional and national mock trial competitions. This was a way of merging all those things together.”

An immersive, virtual experience
Byerly approached Myers with the idea of a virtual mock trial in spring 2009. He hoped to conduct the trial in the SCR with a virtual courtroom projected on all four walls and with students and faculty participating both in the room and as avatars in the virtual courtroom.

Once he had the go-ahead from Myers, Byerly turned to RENCI’s Conway, who created the courtroom in Second Life by building upon what ITS Teaching and Learning had already created. Byerly then looked to Borland, who used his visual programming prowess to adapt the virtual courtroom so it could display on the walls of the SCR.

“What we ended up with was a virtual world that provides an immersive experience,” said Conway. “You can look one way and see the lawyers, another way and see the jury. You can turn around and see the virtual audience. It’s a three-dimensional experience, which makes it more realistic.” 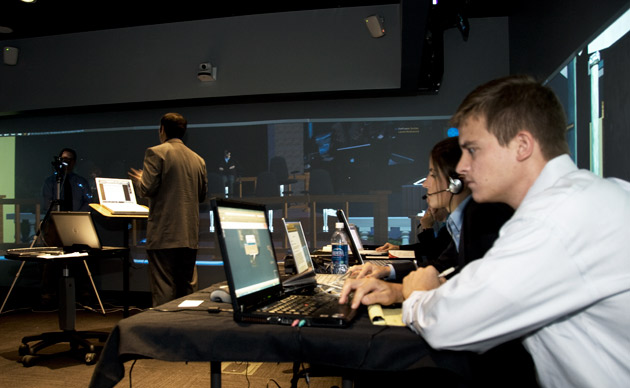 Erin Adair, instructional technologist at the School of Law, provided a live stream of the trial back to students in a law school classroom and the school’s rotunda.

Byerly said virtual mock trials could be a way to give students courtroom experience with real judges, lawyers and juries without having to gather everyone at the same location, thereby saving time and money. Lawyers and commercial firms that conduct mock trials could also find virtual worlds useful, since they often work together on mock trials that attempt to understand jury reactions to different courtroom strategies.

“It could be a way to teach law to those who don’t have access to a courtroom,” said Byerly. “High School students could attend mock trials or conduct their own mock trials. You could bring together really diverse groups that it would be difficult to assemble in the real world.”