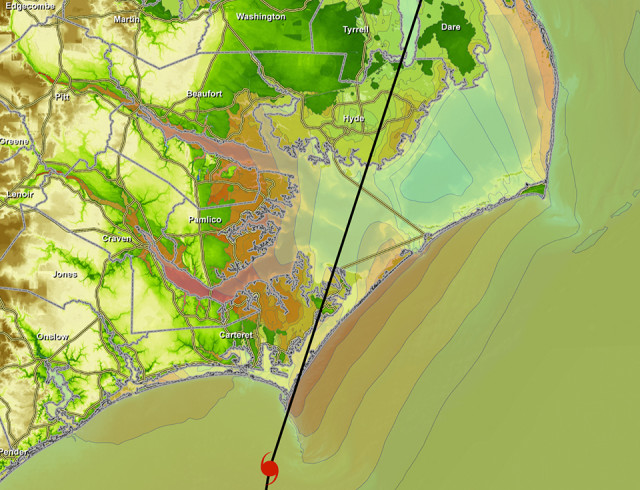 CHAPEL HILL, NC – The state of North Carolina is the third most susceptible to hurricane and tropical storm damage, with only Florida and Louisiana taking more hits from hurricanes in the history of weather tracking. In recent years, RENCI has contributed to the never-ending task of protecting the North Carolina coastline from potential damage by developing cyberinfrastructure and software to construct models of wave surge from large-scale storms.

These efforts were recognized last week when collaborators Brian Blanton, PhD, senior research scientist at RENCI, and Rick Luettich, PhD, director of UNC-Chapel Hill’s Institute of Marine Sciences and lead scientist for the Department of Homeland Security Coastal Hazards Center at UNC-Chapel Hill, were awarded a grant from NOAA’s Office of Weather and Air Quality. The $178,772 two-year grant is one of several (totaling $1.3 million) for the development of new technology, research, and software for NOAA’s Joint Hurricane Testbed (JHT).

The JHT is intended to further NOAA’s commitment to create a “Weather-Ready Nation,” in which the country is prepared for environmental events that affect safety, health, economy, and security.

“We hope that this project’s results will substantially strengthen the NHC’s ability to access these high-resolution ADCIRC storm surge forecasts being run at several academic research facilities, including RENCI,” said Blanton, the project’s Principal Investigator. “We want to add value to the hard task of predicting detailed storm surge impacts in near-real time and at least partially bridge the gap between federally funded academic research and critical federal operations.”