25th GENI Conference looks towards the future of advanced networking

The 25th GENI Engineering Conference hosted by Florida International University in March provided an excellent forum for over 100 participants from industry, academia and government to come together and discuss a variety of issues relevant to testbeds for at-scale experimentation in networking and distributed systems. Topics discussed included:

RENCI was an active participant in the conference with a plenary session presentation by Shannon McKeen, director of membership and engagement for the RENCI-managed National Consortium for Data Science. McKeen reported on the mission, structure and operations of the newly formed Future Cyberinfrastructure Consortium (FCIC), the community consortium set up to support GENI. He explained the FCIC’s goal to design, deploy, operate, sustain, and evolve an advanced distributed cyberinfrastructure to support education and multiple heterogeneous research test beds addressing grand challenge questions important to science and society. His session also focused on potential membership categories, a broad governance vision, the role of data science and a consortium five-phase evolution process. This plenary session can be found here. 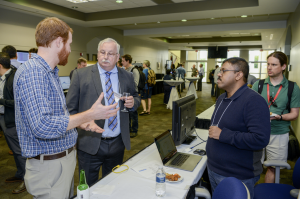 Anirban Mandal and Paul Ruth, RENCI researchers who are part of the DoE-funded Panorama project led by the Information Sciences Institute at USC, presented a Panorama-based demonstration and were named second runner up among all demonstrations presented at the conference. The title of their demo was Data Flow Prioritization for Scientific Workflows Using a Virtual SDX on ExoGENI. They presented a novel and dynamically adaptable networked cloud infrastructure driven by the demands of a data-driven scientific workflow. The demo also showed how a virtual Software Defined Exchange (SDX) platform would instantiate on ExoGENI, a widely distributed networked infrastructure-as-a-service (NIaaS) platform, and provide additional functionality for management of scientific workflows. One of the key features of this demo was showing how the tools developed in the DoE Panorama project can enable the Pegasus Workflow Management System to monitor and manipulate network connectivity and performance.

The schedule of the conference and the various presentations can be found by clicking here.

GENI (Global Environment for Network Innovations) is an open infrastructure for at-scale networking and distributed systems research and education that spans the U.S. For more information, visit the GENI website.