Professors at NC State University and UNC-Chapel Hill have access to a tool that can bring both excitement and exploration into their curriculum – the Social Computing Room (SCR). While the resource is available on both campuses, educators can be unsure about how it effectively fits into their course plans.

NC State’s Coffee and Viz series hopes to provide ideas for instructors of all disciplines by highlighting those already using SCRs and other visualization spaces and by providing speakers with novel ideas for the use of visualization in education and research.

The SCR in the D.H. Hill Library, called the Visualization Studio, is a square room with a floor-to-ceiling desktop on all four walls, making it ideal for presenting large volumes of information, interactions with data, and group projects that involve multimedia. The space was created through a collaboration between the RENCI and NC State. 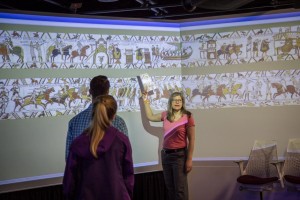 Mell highlights a portion of the tapestry for her students.

Mell uses the SCR to teach the Bayeux tapestry, a large embroidery stitched by Anglo-Saxon women for Norman rulers. Mell had never attempted to teach the tapestry in class before because of its massive size – 230 feet in length and 20 inches high. Working with Digital Research and Scholarship Librarian Markus Wust and University Library Technician Shaun Bennett, Mell was able to use the four large walls of the SCR to create an environment where students could not only study the Bayeux tapestry but also become immersed in its story.

According to Mell, the Internet has brought a “revolution of accessibility to rare and precious objects” that were once only accessible via a trip to a museum. Now, with the SCR, Mell can truly “recreate digitally the experience of the museum.”

Burgess also uses the SCR to immerse her students in another world, albeit the more modern and tragic world of 9/11. As part of a larger unit, Burgess has her students read the The 9/11 Report: A Graphic Adaptation. This version of the report includes an 18-page timeline of events that, like the Bayeux tapestry, is too large to appreciate by flipping through the book. Wust and Burgess worked together to bring the timeline to the SCR walls, along with a book of comics, In the Shadow of No Towers, and a symphony based on that text.

What happened next, according to Burgess, is that student learning transformed into a “performative experience.” Rather than reading for homework and discussing in class, students were able to sit on the floor, stand beside the materials and touch them, and place sticky notes on the walls to capture their thoughts. The life size versions of text allowed students to interact in a way they would not have in the classroom, both physically and mentally.

Visitors to the first Coffee and Viz presentation wandered out discussing ideas they could try with their own course material based on what Mell and Burgess shared. That brainstorming chatter is the main reason that NC State holds the Coffee and Viz series. Karen Ciccone, director of the Natural Resources Library, says educators still need to see the SCR to appreciate it.

“Many teachers may have heard of it, but they haven’t been inspired to make the effort to see what it may be able to do for their classes,” she said. “The library is a natural interdisciplinary hub of the university, and we hope this series provides a forum for educators to share work, get ideas, and find collaborators across departments.”

The next event in the series will be held Friday, Sept. 18 at the Duke Energy Hall at the James B Hunt Jr. Library and will feature Ben Watson, associate professor of computer science at NC State. Watson will discuss “visualization as persuasion,” or how visualization can be used as a tool for communication rather than discovery.

Coffee & Viz programs are free and open to the public. Coffee and light refreshments are served at 9:15 a.m. and the program begins at 9:30 a.m. For more information, contact Karen Ciccone. For those interested in finding more ideas on teaching in an SCR, read the RENCI white paper that documents the development of the SCRs and some of their uses.