Crossing the pond in the name of better data management 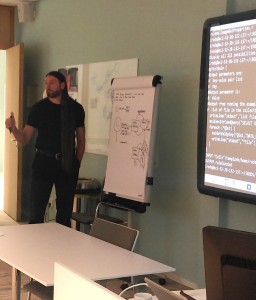 The iRODS data management platform and the iRODS Consortium that works to sustain it are making waves well beyond their home base in Chapel Hill, NC.

This week, three of the smart, savvy people behind iRODS and the Consortium (iRODS originator Reagan Moore, Consortium Executive Director Dan Bedard, and Chief Technologist Jason Coposky) traveled to France, the United Kingdom, and the Netherlands to talk about the benefits of iRODS as a data management solution for large distributed research projects, to provide training for those interested in becoming iRODS power users, and generally to evangelize about software that is now being used far and wide in Europe, the U.S., Asia, South America, Australia, and South Africa.

Moore, RENCI’s chief domain scientist for data and a professor in the UNC School of Information and Library Science, attended the 6th Plenary of the Research Data Alliance (RDA) in Paris Sept 23 – 25. At the meeting, he contributed a wealth of expertise and information to the Data Fabric working group, and presented talks at FOUR(!) different working sessions, with topics ranging from primary trustworthy data repositories to data management for high energy photon and neutron sources.

Meanwhile, on Tuesday, Sept. 22, Bedard led a Birds-of-a-Feather session on the challenges of Data Management at Scale. The session was part of a daylong workshop called Best Practices for Big Data in Genomics that was presented by iRODS Consortium member DDN in Cambridge, UK.

From Cambridge, it was on to Utrecht, The Netherlands, where Coposky and Bedard presented a two-day advanced iRODS training workshop on Sept. 23 and 24. The workshop was sponsored by the University of Utrecht, where Research ICT (Information and Communication Technology) Developer Ton Smeele leads a national effort to fast-track The Netherlands as a leader in data science.

Like most good techie workshops, the format was hands-on, informal, and included plenty of examples of iRODS uses in real-world scenarios. Topics included using rules and microservices to automate actions such as metadata extraction and file ingest, configuring storage resources, configuring iRODS for scalability, and information on how to monitor, diagnose and troubleshoot problems.

Unfortunately, neither Reagan, Dan, nor Jason invited me to travel with them to Europe to document their European tour (maybe next time guys?). But I think its safe to say that researchers, scientific programmers, IT administrators, and other specialists who build research data solutions learned valuable tips and picked up plenty of new information this week that will help them take control of their data.

Home > Blog > Crossing the pond in the…