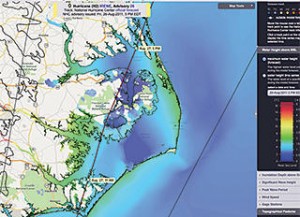 Better models of coastal storm surge are among
the reasons that HPC matters.

Every November thousands of researchers and industry representatives in high performance computing and related fields, such as advanced networking, data storage, and analysis, meet for the annual supercomputing conference.

This year SC14 will bring together computer engineers, software developers, computational scientists, industry CTOs, grad students, and assorted geeks from around the world to New Orleans during the week of November 17. RENCI will be there, sharing information about the iRODS data management platform, the iRODS Consortium, ExoGENI and related projects on Networking Infrastructure as a Service (NIaaS), the National Consortium for Data Science, and other RENCI research projects.

But in addition to gawking at the latest technical innovations and sampling New Orleans’ famed cuisine and nightlife, SC14 attendees (and the rest of the world) should know that “HPC Matters” is more than the slogan for this year’s conference.

As an article in the most recent edition of Scientific Computing points out, high performance computing (HPC) leads to discoveries and innovations in everything from manufacturing to medicine. In fact, the Scientific Computing story singles out RENCI’s work in modeling coastal storm surge as an example of how HPC impacts public safety. RENCI’s environmental initiatives team, led by Oceanographer Brian Blanton, PhD, works closely with several partners to develop detailed, high-resolution storm surge models for the U.S. East Coast.

There are plenty of other examples of how HPC matters, some of them highlighted in the Scientific Computing story. While SC14 in New Orleans will offer big name speakers, in-depth discussions, hands-on workshops, and exhibits designed to delight the elites of the tech world, the true impact of HPC is everywhere. You’ll find it in new and better consumer products, new drug therapies, safer, more fuel efficient cars, and better storm surge models that help protect people and property in coastal regions, including North Carolina.