The next generation of potential computer scientists are making their way to K-12 classrooms each day, but are these young minds being exposed to the fundamentals of computer science? According to Code.org, only one in four American high schools offer computer science courses, and few of those schools allow the course to count toward graduation.

To counteract these statistics, some computer scientists are working harder to share their knowledge and experiences from the field. RENCI’s Director of Informatics and Chief Technology Officer Charles Schmitt, PhD, joined the cause recently when he visited the North Carolina School of Science and Math (NCSSM) to speak to a group of students about computer science. 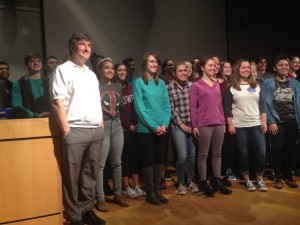 RENCI CTO Charles Schmitt poses with a group of the students who attended his talk at NCSSM.

Schmitt’s talk, entitled “Genomics from the Computer Science Perspective,” focused on how computers can solve puzzles in modern genomic science.

He began with the case of Elizabeth Davis, a woman with a genetic condition that remained undiagnosed until she visited a doctor versed in the relatively new science of gene sequencing.

Using her story as a touchstone, Schmitt covered the basic history of computer science in genomics and then focused on three major approaches to solving genomics problems with data:

The ultimate goal of the talk, according to Schmitt, was to showcase the current reach of computer science, particularly in genomics, and to pique the students’ interest.

“We are working toward a grand challenge,” said Schmitt. “How can we integrate human expertise, computer models, data-driven approaches, and knowledge-driven approaches to solve the problems of the future? These kids are going to be the ones to figure that out.”