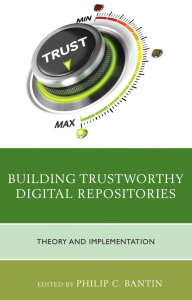 The Waldo Gifford Leland Award is presented annually by the Society of American Archivists (SAA) to an author or authors in recognition of “writing of superior excellence and usefulness in the field of archival history, theory, or practice.”

It’s an achievement worth bragging about, and this year, bragging rights belong to Philip C. Bantin, director of the archives and records management specialization at Indiana University, as well as to multiple chapter authors, including a team from RENCI, UNC-Chapel Hill and Harvard University.

The SAA describes Bantin’s award-winning book, Building Trustworthy Digital Repositories: Theory and Implementation as “a comprehensive look at the state of long-term preservation of and access to digital records.” The book, published last year, includes contributions from 41 international experts who discuss theories and offer practical guidelines relevant to all phases of the digital preservation lifecycle. Eleven authors from RENCI, the Odum Institute for Social Science Research, other UNC departments and institutes, and Harvard contributed a chapter on repository implementation called VISR: The Virtual Institute for Social Research. The chapter is a case study of VISR, a secure cyberinfrastructure for sharing, analyzing and storing social science data established by RENCI and the Odum Institute. It was based on work led by Odum Institute Director Tom Carsey, one of the chapter’s lead authors.

The Waldo Gifford Leland Award, established in 1959, takes its name from an American archival pioneer who played a central role in establishing the U.S. National Archives and served two terms as SAA president during the 1940s. As the SAA Award Committee noted, “Pulling together many different contributors into a cohesive volume is no easy task, but Bantin manages to accomplish just that to produce a work that is very relevant to the challenges all archivists face today with the massive amounts of digital records that are part of repositories both large and small.”

The book is available through Amazon, Google Books, and its publisher, Rowman & Littlefield.

For more information on the Virtual Institute for Social Research, check out our RENCI white paper.