Tracking the story of the ENIAC programmers 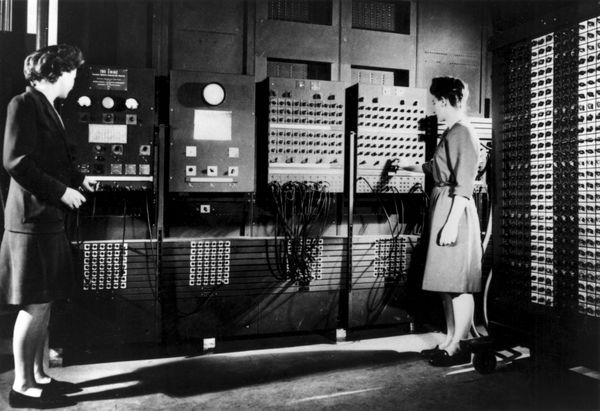 Six women who changed computing finally get their day in the spotlight.

More than 70 years ago, six brilliant mathematicians came to Philadelphia to take part in a secret U.S. Army project designed to help the Allies win World War II. These young pioneers of the computing age learned to program using only logical diagrams and their considerable talents—no programming languages or tools existed to help them.

The result of their efforts was ENIAC (Electronic Numerical Integrator And Computer), the first all-electronic programmable computer, capable of running a ballistics trajectory—a differential calculus equation—in seconds.  The Army unveiled ENIAC to the public in 1946, but the six mathematicians who poured their brainpower and creativity into the project were never recognized for their work.

They were the first modern-day programmers, but they were also women and expected to stay in the background. In photos from the ENIAC public debut, they are pictured but not identified, functioning as “refrigerator models” as one computer historian termed it, a reference to 1950s TV commercials for home appliances, in which smiling female models in high heels would open refrigerator doors. 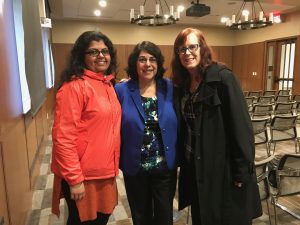 Kathy Kleiman (center), with RENCI Communications Director Karen Green (right), and iRODS Automation Engineer Jaspreet Gill, who was inspired to pursue a career in computer science by the story of the ENIAC programmers.

learned about the ENIAC project as a student and has devoted much of the last 20 years to telling the story of the ENIAC programmers and to ensuring they receive credit for their pivotal role in computing history. Kleiman launched the ENIAC Programmers Project, and in 2008 she talked about her efforts at an event sponsored by RENCI and Duke University.

This February, she was back at Duke, introducing the documentary The Computers, the award-winning film she spearheaded that premiered at the 2014 Seattle International Film Festival. The film explains the daunting tasks the ENIAC team faced and delves into the backgrounds of the women of ENIAC: Kathleen Mauchly Antonelli, Frances Bilas Spence, Frances “Betty” Snyder Holberton, Jean Jennings Bartik, Marlyn Wescoff Meltzer, and Ruth Lichterman Teitelbaum. Over the years, Kleiman interviewed and became close friends with four of the women (Antonelli, Bartik, Holberman, and Meltzer). Their frank comments and remembrances are sprinkled throughout the film and help recreate a time when sexism was temporarily put on hold in order to win the war.

While most women who were recruited into the job market in the early 1940s were pressured to leave the workforce after the war, the ENIAC programmers stayed on in the nascent field of computer programming because, as Kleiman said, “no one else knew how to program the ENIAC.”

Kleinman believes telling the story of the ENIAC women and influential female computer scientists can change stereotyped beliefs about professional occupations, inspire more girls to pursue IT careers, and ultimately lead to an IT community that is more inclusive and successful at developing products that serve a diverse population.

The Computers was written and produced by Jon Palfreman, Kathy Kleiman, and Kate McMahon, with major funding from the Brin Wojcicki Foundation and the Donor Advised Fund on behalf of Lucy Southworth Page. For a full list of funders, click here.

For more information, visit the ENIAC Programmers Project website.
To listen to a recording of Kathy Kleiman’s remarks at Duke University, click here.
To rent a copy of The Computers from Vimeo, click here.

Home > Blog > Tracking the story of the…