The Triangle Python Users Group is a local organization that brings together experienced and new enthusiasts of Python, a widely used computer programming language. The group has been active in our area since 2002 but recently had a need for a new meeting space in the Chapel Hill area.

RENCI has opened its doors for a few of the group’s activities. Project nights are now held the second Wednesday of each month at RENCI. The informal project nights bring together new Python users seeking support and assistance with more experienced users. Together, they talk about their projects and potentially create cross collaboration.

TriPython also has a monthly featured-speaker general meeting, which rotates around the Triangle. RENCI hosts this meeting during the months of January, April, July, and October.

According to Chris Calloway, RENCI applications analyst and a TriPython member since 2003, part of the magic of the TriPython group is its “DO-ocracy” leadership style. The organization follows no official governance structure, so those who take the time to step up and do things become decision makers. Because of this philosophy, everyone feels ownership for continued collaboration and growth. In addition to fostering their own learning, the organization has sponsored or co-sponsored many Python-centered events, including multiple Python boot camps across the nation and more local events such as “Code in the Classroom.” 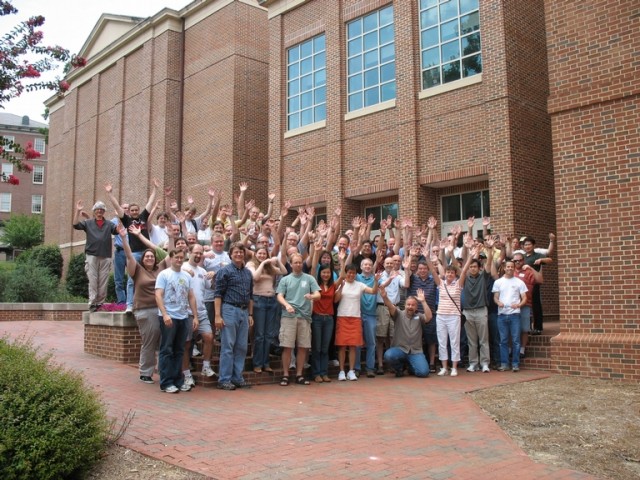 For Calloway, the Python language itself inspires much of the dedication that leads TriPython members to put so much time and energy into the organization. Python is part of the free and open source software movement, which makes it easy for people to use, inspect, and improve upon software written with Python. In addition to increased accessibility, Python also simplifies the software engineering process, with a focus on “being readable above all else,” according to Calloway. With its emphasis on ready-made tools for common use cases, scientists can utilize Python without the need, as Calloway stated, to be a “super genius with both science and software engineering degrees.”

Python can be a particularly important tool for solving issues in the scientific world also. For example, scientists at RENCI have posed two important questions: 1) How much software engineering ability should a domain scientist have?; and 2) How can scientists create sustainable software so that their science is reproducible 10 or 20 years from now? In part of their attempt to answer those questions, RENCI is utilizing the same features of Python that inspire TriPython members.

For those interested in Python or TriPython, the group meets regularly in addition to its meetings at RENCI. Visit their calendar for more information.