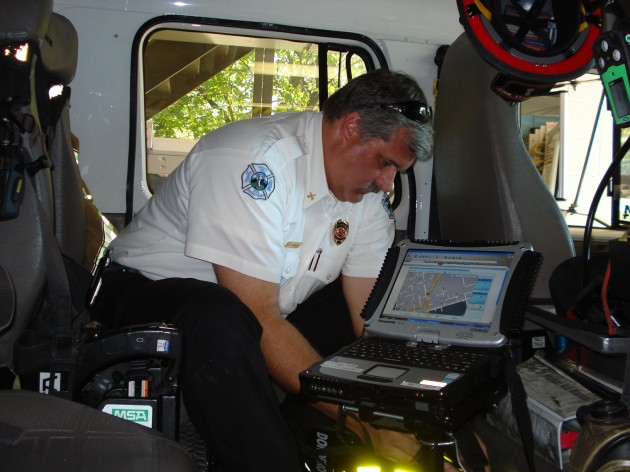 When it comes to managing an emergency, you can’t have too much information. Sensor and wireless communication technologies make it possible to monitor and manage fire trucks and rescue vehicles in the field, but relatively few vehicles are equipped with such technologies. The software needed for such systems is often costly and the learning curve steep.

RENCI’s Automated Vehicle Location (AVL) project aims to change that by developing a reliable, cost effective and easy-to-use tracking system that keeps an eye on all vehicles involved in an emergency response. The prototype AVL system, now being tested with the Chapel Hill Fire Department, requires only a GPS-enabled laptop computer with an air card and external antennae connected through cell phone networks to a computer at the emergency operations center.

The computer on the emergency vehicle runs open source software called OpenGTS and transmits information to the emergency operations center, which can then be viewed on a simple website. When a vehicle heads out on an emergency, the software computes the vehicle’s position and speed using GPS coordinates. Back at the operations center, vehicles can be tracked and rerouted as needed. A Google Maps overlay allows the command center to match GPS coordinates with street addresses. 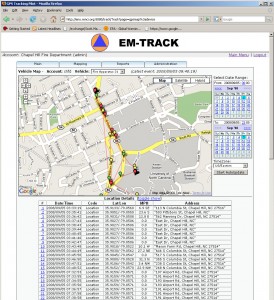 “It’s all about knowing where your units are and having the information to make the best decision,” he said. “With a large-scale incident that evolves over time, trucks get bogged down and they move short distances as the situation changes. It’s hard to remember where all your vehicles are, who is closest to handle a particular incident and how they will get there. The AVL can give you all this information in one glance.”

RENCI configured the off-the-shelf AVL system to meet the unique needs of emergency responders and Chapel Hill firefighters are providing the initial feedback on the system.

Because the system is so portable—it can run using a simple GPS-enable cell phone instead of a laptop—it promises to be useful during disasters when many vehicles are called into action or as tool to determine a department’s tracking needs and whether investment in a commercial system is worthwhile.

The AVL is one piece of a comprehensive situational awareness system that RENCI researchers are developing for emergency responders. The complete package will integrate a simple AVL system with data from other sources, such as sensors, video cameras, rain gauges and weather radars, to give responders overall situational awareness. Emergency operations center will then be able to access the big picture: the location of smoke and fire and flooded roads in relation to vehicles in the field, traffic problems, the effects of bad weather, and more.