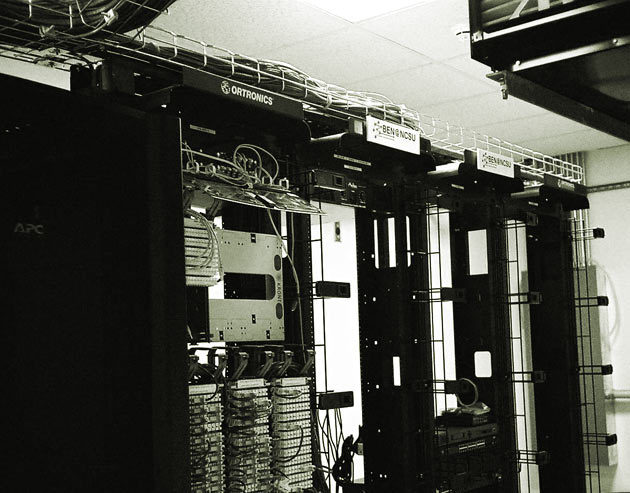 BEN serves as a test bed for experimentation with new networking technologies that will help make networked communications faster, easier and more reliable. BEN is “breakable” because it is not meant to be a stable commercial network, such as those that keep the commercial Internet running. Instead BEN allows network researchers to experiment with disruptive technologies—those that are likely to have a major impact in the years to come and thereby disrupt standard operating procedures for networks.

The new network connects RENCI facilities at NC State, Duke University, UNC Chapel Hill, RENCI’s main office at Europa Center in Chapel Hill, and MCNC in Research Triangle Park. RENCI administers the network and provides access to the fiber for researchers at the Triangle area campuses through its engagement centers. With funding from the National Science Foundation, RENCI and Duke are using BEN as a test bed for the Global Environment for Network Innovations (GENI) project. GENI’s aim is to forge new solutions to problems facing today’s Internet including inadequate security, reliability, manageability and scalability.

RENCI at NC State also upgraded its 170-inch by 96-inch visualization display wall into a fully digital system that more accurately adjusts images on the screen. The display system uses 16 projectors and can display images at a resolution of 5,120 by 2,880 pixels.

The visualization wall allows researchers to view large-scale, time-dependent data as color-coded visual simulations of complicated processes, from astrophysical phenomena to the relationships among documents in a large data archive.

For more on BEN, see http://ben.renci.org.

For more on GENI, see http://www.geni.net

RENCI…Catalyst for Innovation
The Renaissance Computing Institute, a multi-institutional organization, brings together multidisciplinary experts and advanced technological capabilities to address pressing research issues and to find solutions to complex problems that affect the quality of life in North Carolina, our nation and the world. RENCI leverages its expertise and resources in leading edge computing, visualization, networking and data technologies to catalyze new collaborations and solve problems. Founded in 2004 as a major collaborative venture of Duke University, North Carolina State University, the University of North Carolina at Chapel Hill and the state of North Carolina, RENCI is a statewide virtual organization.