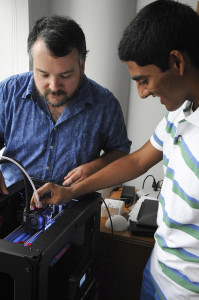 Fuel emissions from motors in cars, motorcycles, even lawnmowers and chainsaws, are one of the greatest contributors to climate change. Using the technology and expert assistance of UNC’s Renaissance Computing Institute (RENCI), a research institution that develops advanced technologies to enable research and innovation, Rishi Rajagopalan, is trying to tackle this environmental problem.

As a project for his academic independent study last spring, Rajagopalan, a rising senior at Jordan High School in Durham, designed a compressed air engine that requires only pressurized air to turn the crankshaft that allows it to run. The two-cylinder engine could be used to power dirt bikes, lawn mowers, and other small, motorized devices, and Rajagopalan said a larger model could eventually be built to power automobiles.

Rajagopalan designed his engine using Solid Works, a computer aided design software package, but his school lacked the tools to help him build a physical prototype to bring his design to life. To make his theoretical project a reality, RENCI stepped in to provide cutting-edge technology and expertise.

“Technology-wise my school was limited,” said Rajagopalan. “I took my independent study as far as I could, but to create the engine, my school just didn’t have the tools to make that happen.”

A family friend introduced Rajagopalan to RENCI Senior Research Software Developer Erik Scott, who suggested the student use RENCI’s 3D printer to create a working model of the engine. The printer gives RENCI staff, and now Rajagopalan, the opportunity to explore new methods of design and manufacturing.

Since June, Rajagopalan has participated in an informal, hands-on internship at RENCI, working almost every workday to slowly but surely build his compressed air engine using the 3D printer.

“I first took a look at the design work he had already done, then showed him how to present that work in a way the printer can interpret,” said Scott. “This is the kind of technology preparation you really can’t get in a typical high school environment.”

The 3D printer works by layering thin strands of plastic wiring over and over on a platform. The printer heats the plastic and molds into the proper form, creating a solid object. Rajagopalan sends his computer-developed engine design to the printer, much like a person sends a word processing file to a printer for output on paper. The 3D printer then “builds” each part to be fitted into the complete engine.

Rajagopalan, who hopes to study engineering at NC State University after graduation, said he plans to continue working on his project at RENCI until he is satisfied with the finished product.

“Hopefully my research can open new avenues for alternative energy, which is the field I want to continue pursuing throughout college,” said Rajagopalan. “The help from RENCI really allowed me to explore my interest further.”