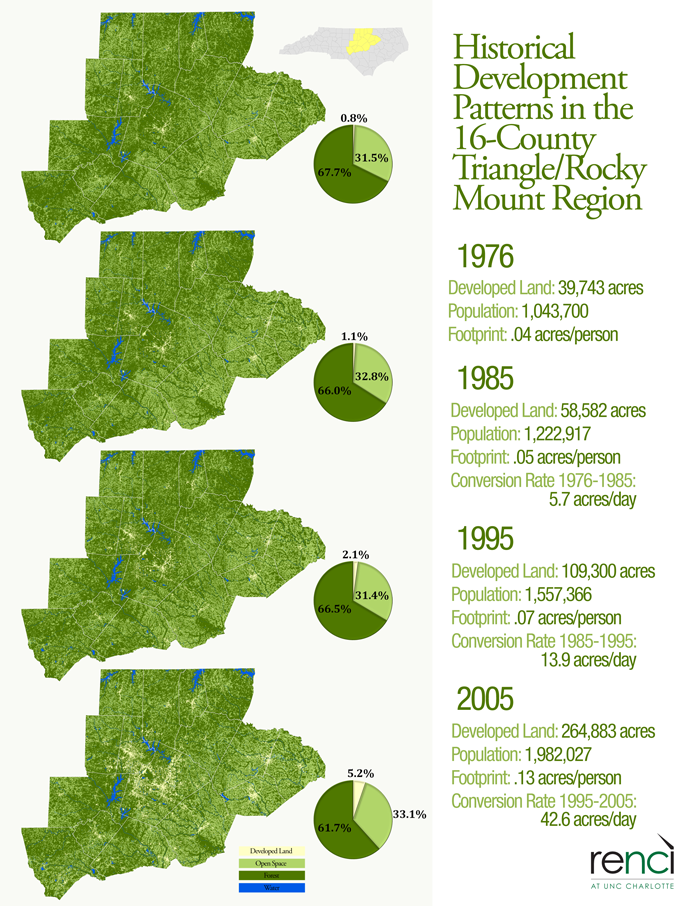 A study by researchers RENCI at UNC Charlotte researchers shows 570 percent increase in developed land since 1976.

CHARLOTTE – From 1976 to 2005, developed land in the 16-county Greater Triangle and Rocky Mount region increased nearly 570 percent, from 39,743 developed acres in 1976 to 264,883 acres in 2005. By 2040 this figure is expected to increase nearly 150 percent or an additional 393,925 acres, according to projections just released from a forthcoming study by researchers at the Renaissance Computing Institute (RENCI) at UNC Charlotte.

During those years population increased nearly 90 percent, from a little more than 1 million to nearly 2 million residents. The 16-county region, which includes the three-county Triangle core of Durham, Orange and Wake counties, is projected to increase by nearly another 2 million residents, a 90 percent increase, by 2040. This population growth will result in an increase in the average amount of developed land per person, or “development footprint,” from 0.04 acres per person in 1976 to 0.17 acres per person projected by 2040.  These figures indicate more recent growth has consumed land at a greater rate per capita than in earlier decades, and the researchers project that pattern to continue in the next 30 years.

Not surprisingly for the greater Triangle area, researchers found the presence of universities was a significant predictor of where growth took place. Among the variables that were found to be predictors of growth were “proximity to universities,” as well as proximity to highway interchanges, proximity to urban centers with populations greater than 50,000, and the density of road networks. The research didn’t show cause-and-effect, only that these variables tended to predict where development in the region was more likely to occur. The forecasts do not incorporate impacts experienced between 2006 and 2010, including from the economic downturn, due to funding constraints, although the model has the ability to incorporate new data when it’s available.

Growth in the Greater Triangle and Rocky Mount region over the past 30-plus years is not surprising given the area’s abundant natural amenities, attractive business climate and presence of multiple world-class universities. In 2011 alone, Forbes.com ranked the Raleigh-Cary MSA No. 1 in its list of “Best Places for Business and Careers” and No. 2 in its “Next Big Boom Towns” and “America’s Best Cities for Young Professionals” lists. By focusing their analysis on the 16-county area stretching from Moore County in the west to Edgecombe County in the east, RENCI researchers hope to assist policy makers, planners, and land conservationists in developing tools to understand and plan for future regional growth.

Given the region’s rapid growth and land development, many have wondered what challenges it will face over the next 30 years in accommodating growth and maintaining natural amenities. Researchers at UNC Charlotte’s Center for Applied Geographic Information Science (CAGIS), a research partner with RENCI at UNC Charlotte, have worked to address these and other urbanization questions in the Greater Triangle and Rocky Mount region using their FUTure Urban-Regional Environment Simulation (FUTURES) model. The Greater Triangle and Rocky Mount study was made possible through funding from the Z. Smith Reynolds Foundation and RENCI’s home office in Chapel Hill.

The FUTURES model simulates regional landscape patterns and enables exploration and visualization of alternative development outcomes. Satellite image analysis of impervious surfaces reveals how the landscape has changed from 1976 through 2005. The Triangle region analysis begins in 1976, the first year for which complete satellite data were available, to complement prior iterations of this RENCI research project in other regions of the state. FUTURES combines the satellite image-based maps of development with population trend data and predictors of development to estimate future demand for land and the probable locations of new development. New growth is then realized at local scales as discrete patches of development which aggregate over time to produce regional patterns of urban form and landscape fragmentation through 2040.

John Hodges-Copple, director of regional planning at the Triangle J Council of Governments, said the RENCI model complements the population and employment forecasting the region undertakes to plan infrastructure investments.  “By helping us better understand how growth has unfolded in the region, and the implications if historic trends continue, the FUTURES results can better inform the forecasts that local communities use to plan for such major infrastructure investments as roads and transit systems, schools and water systems.”

Hodges-Copple added that the region is in the midst of developing long range transportation plans, and is using CommunityViz software to develop detailed scenarios of future population and employment growth. Results from the FUTURES project for the Greater Triangle and Rocky Mount region can serve as a key barometer in evaluating the CommunityViz scenarios for the areas of Chatham, Durham, Franklin, Granville, Harnett, Johnston, Orange and Wake counties that are included in the plans.   Regional stakeholders including representatives from local governments, regional organizations, universities and the Urban Land Institute-Triangle membership are starting a regional dialogue about the models’ results and future applications.

Researchers also found that growth trends, in terms of percent increases, in the three-county core of the Triangle area are more pronounced than those found in the larger 16-county region.  While developed acres increased nearly 650 percent from 1976 to 2005, from 18,286 acres to 136,682 acres, population also demonstrated a significant increase of nearly 130 percent over this same time period, increasing from 488,600 in 1976 to 1.1 million in 2005.  Looking forward to 2040, population is projected to increase by 106 percent, approaching 2.3 million, while developed acres are expected to increase 154 percent to 347,765 acres, if current development trends continue.  These figures result in slightly less per capita land consumption in the three counties, with the development footprint increasing from 0.04 acres in 1976 to 0.12 acres per person in 2005, and a development footprint of 0.15 acres per person projected by 2040, a slightly lower projection than the larger 16-county region.

The results also show great variation in forecast gains in development for the region’s counties. Chatham, Harnett and Johnston are expected to experience the highest percent increases in development between 2005 and 2040, with Harnett County experiencing the greatest increase – 242 percent – in developed acres, Johnston County experiencing a 201 percent increase, and Chatham County a 185 percent increase. By comparison, developed land in Wake and Durham counties is projected to increase 158 percent and 156 percent, respectively, between 2005 and 2040. These two most populous counties in the region are expected to account for approximately half, or 37 percent and 12 percent, respectively, of total forecast gains for the 16-county region.

The full report and county-level results for the Greater Triangle and Rocky Mount region will be available later this spring. Results for the 16-county and three-county regions are available at the UNC Charlotte Urban Institute website. The 16-county Greater Triangle and Rocky Mount study builds upon similar studies by RENCI at UNC Charlotte, including an analysis of the 19-county Western North Carolina region released in 2010 and the original study of urban growth in the southern Piedmont / greater Charlotte metropolitan region released in 2007.

UNC Charlotte is North Carolina’s urban research university. It is the fourth largest campus among the 17 institutions of The University of North Carolina system and the largest institution of higher education in the Charlotte region. Spring 2012 enrollment exceeded 25,300 students, including 5,000 graduate students.

For more information about FUTURES, or to schedule an interview with the study’s authors, contact Sara Gleave at (704) 687-1193 or sgleave@uncc.edu.