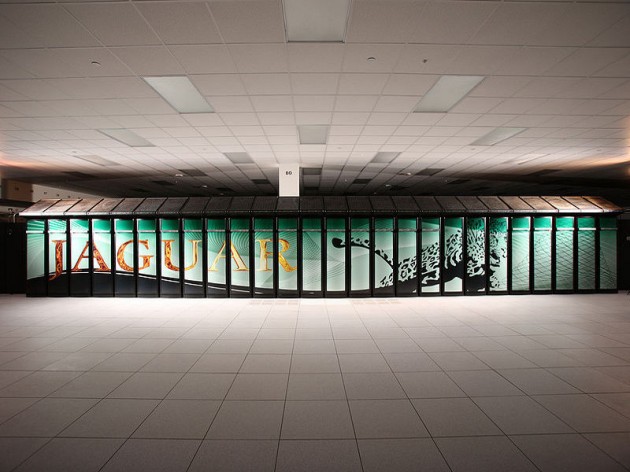 Jaguar, at Oak Ridge National Laboratory, currently reigns as the fastest supercomputer at a U.S. Department of Energy lab.

CHAPEL HILL, NC–High performance computing (HPC) researchers at the Renaissance Computing Institute at UNC Chapel Hill (RENCI) will collaborate in a nationwide research effort designed to ensure that scientists will be able to take full advantage of some of the world’s largest computing systems at U.S. Department of Energy laboratories.

RENCI will receive $1.075 million over the next five years from the DOE’s Scientific Discovery through Advanced Computing (SciDAC) program for its part in the multi-institutional Institute for Sustained Performance, Energy, and Resilience (SUPER).  SUPER is one of three new SciDAC enabling technologies organizations funded to address broad technical challenges inherent in effectively using extreme-scale systems. These systems today are capable of more than 1 quadrillion floating point operations per second (1 petaflop/s) and performance is expected to improve by several orders of magnitude over the next five years.

“These systems are valuable national resources that need to be used as productively as possible,” said Rob Fowler, director of RENCI’s high performance computing research group and principal investigator for the RENCI effort.  “The SUPER Institute aims to facilitate fast, efficient, and reliable computation on these new systems as well as to reduce energy usage, all while minimizing the time and effort required of scientists who depend on them.”

RENCI will contribute to a comprehensive toolkit to monitor and analyze all system hardware resources including power consumption, input/output, and communication.   The analyses will be used to guide strategies for restructuring software programs to achieve greater speed and power efficiency.   A key thrust of SUPER’s research will be the dynamic automation of the restructuring process so that the burden will not fall to the scientists who use DOE systems.  SUPER researchers also will work to automate performance tuning, which will help software perform well across a wide range of systems, including future systems.

Although individual computer components in large systems rarely fail, the sheer number of parts in these systems means that component failures are a common occurrence, said Fowler.  To be productive the systems and the programs that run on them must be able to continue to operate even when a component fails.

“That’s where the ‘resilience’ in the institute’s title comes into play,” said Fowler.  “A key part of this research is the tradeoff between raw speed and ensuring that progress is made in the face of adversity. Large commercial and financial applications successfully deal with similar issues on the Internet.”

“The innovations from SUPER will help accelerate these research programs,” said Fowler.