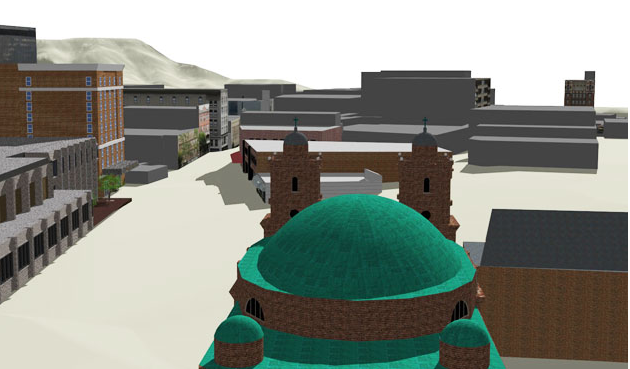 3D model looking south down Asheville’s Haywood Street with the Basilica of St. Lawrence (green domed roof) in the foreground.

As the city of Asheville considers how to redevelop sites in its busy and historic downtown, researchers at RENCI at UNC Asheville are assisting them with a tool that models design alternatives in an interactive, three-dimensional environment.

A new RENCI-developed model of Haywood Street  and the Civic Center/Basilica of St. Lawrence Plaza was unveiled at a meeting at the Asheville Design Center on Wednesday, March 17. The model uses geo-referenced data to create an accurate, 3D animation of a portion of Haywood Street that includes the Asheville Civic Center, the adjacent Basilica of St. Lawrence, and a parcel across the street that includes a small parking lot and an empty storefront.

The city wants to redevelop that parcel but is sensitive to how redevelopment could impact the 100-year-old brick and stone Basilica, which sits on high ground at the north end of the street, its impressive façade viewable for several blocks.

The new RENCI tool creates a geo-referenced model of Haywood Street’s buildings, sidewalks and the street—complete with landscaping and architectural details so that users can easily recognize the locations in the model. When completed, the model will use the Unity 3D video game engine to allow users to walk around and view details from different perspectives, much as they would in a video game.

“We used building blueprints to make the most accurate models possible and to flesh out the details like windows and streetscapes,” said Jeff Hicks, a geospatial analyst at RENCI at UNC Asheville. “Incorporating the game engine will add a new level of interactivity.”

The tool will be a new-and-improved version of the decision support tool developed by RENCI at UNC Asheville to model the 2004 floods in the Biltmore Village area. The RENCI researchers partnered with The Elumenati an Asheville-based company that designs immersive projection systems, to incorporate the Unity 3D engine into the model.

“It’s all about using the most trusted information to create tools that tell the story,” said Hicks. “The end goal is to support the decision makers.”