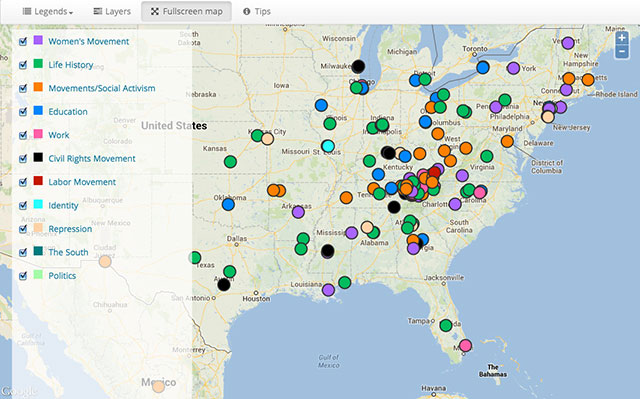 Screen shot of the DH Press project “Mapping the Long Women’s Movement.” Each dot represents a short audio clip; the color of the dots show what the clip is about and their placement on the map indicate where the event occurred.

The Digital Humanities Toolkit, or DH Press, is built on the open source WordPress platform. Users can combine and visualize a variety of digitized humanities-related material to create a range of digital projects, from virtual walking tours and interactive exhibits, to classroom teaching tools and community repositories. The content can be easily organized and managed, as well as migrated in and out of the system to other DH Press projects or to other databases. This makes the toolkit ideal for presenting and sharing humanities-related data.

Although several small test projects have already been created, the official DH Press pilot project, “Mapping the Long Women’s Movement,” was released this week at http://dhpress.org/mapping-the-long-womens-movement/. The project is part of ongoing work by researchers at The Southern Oral History Program (SOHP) at UNC-Chapel Hill to document the journey of female activists who blazed new trails for themselves and future women. With the help of DH Press, SOHP researchers were able to bring to life about 50 oral histories gleaned from conversations with Appalachian women whose activism in labor, healthcare and other fields changed the face of women’s rights.

The researchers indexed the interviews and tagged each with metadata, including dates, key concepts, and location. This data was then visualized on an interactive map. Each point on the map corresponds to a segment of an interview that users can listen to while reading the transcript. Viewers can browse by interview, category, or place to listen to passages. The nature of the software allows users to create their own dynamic visual narrative of the women’s movement in the South.

Next, the DH Press team plans to expand the range of data visualizations possible: for example, by extending the mapping capabilities to include routes and pathways. They also plan to add an interactive timeline feature and explore ways to create tree graphs to visualize genealogies and other relationships among people.

RENCI web interface developer Joe Hope played a key role in designing the DH Press interface. RENCI also hosts the DH Press Sandbox, a web space where potential users can explore the toolkit and create their own digital humanities projects. Academic and research institutions from across the country and around the world have already created accounts in the Sandbox, including the University of Florida, University of South Carolina, and University of Glasgow.

DH Press will be released to the WordPress Plugin Directory after several short development cycles.

About the Digital Innovation Lab

Founded in 2011 by the College of Arts and Sciences, the DIL is committed to interdisciplinary collaboration in the innovation of digital humanities projects, tools, and educational resources, particularly those with applicability beyond the academy. Its priorities include the development of digital projects, products, tools, and applications that are of special social and cultural value and serve the public good; lowering the barriers to participation in digital humanities work by scholars, students, and cultural heritage organizations; and stimulating and sustaining innovation in digital humanities through collaborations with other university units, other colleges and universities around the world, cultural heritage organizations, and cultural industries. Visit http://digitalinnovation.unc.edu/ to learn more.

RENCI is an institute of the University of North Carolina at Chapel Hill that develops and deploys advanced technologies to enable research discoveries and practical innovations. RENCI partners with researchers, policy makers, and technology leaders to engage and solve the challenging problems that affect North Carolina, our nation and the world. The institute was launched in 2004 as a collaborative effort involving UNC Chapel Hill, Duke University and North Carolina State University.

About the Southern Oral History Program