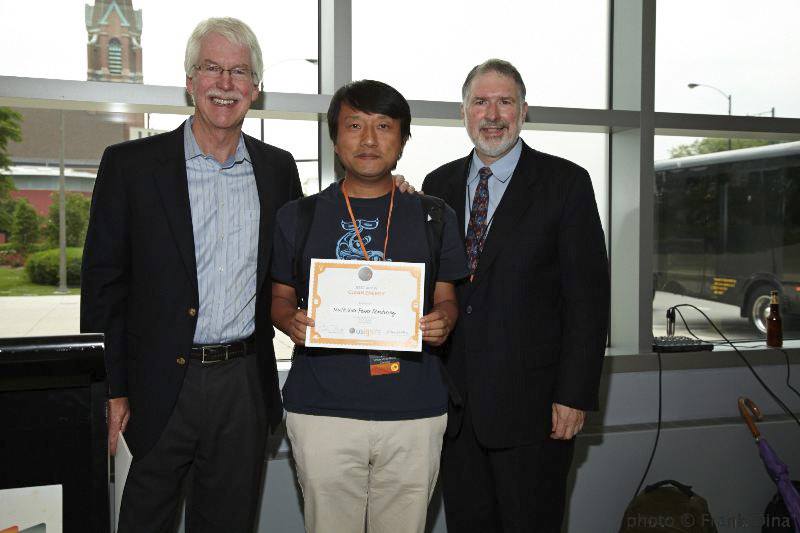 The demonstration and the award for best application in the energy and sustainability sector is the result of a collaboration between RENCI’s networking research group, led by Ilya Baldin, PhD, and an NC State research group led by Aranya Chakrabortty, PhD, an assistant professor in the NC State department of electrical and computer engineering and the FREEDM Systems Center, a National Science Foundation Engineering Research Center at NC State.

At the Application Summit, held June 24 – 26 in Chicago, a RENCI-NC State team demonstrated a prototype test bed system that could be used to collect massive volumes of power system data from thousands of digital recording devices called Phasor Measurement Units (PMUs) deployed across a large power grid. The demonstration also showed how that data could be shared and analyzed using next-generation cyber-infrastructure technologies that include high-speed virtual networking, high performance cloud computing, visualization and data management.

The process developed at NC State uses real-time synchronized phasor measurements, or Synchophasors, streamed from PMUs and time synchronized by GPS, to precisely measure currents and voltages and capture detailed oscillations of the power flows in different parts of the grid. That data can be critical for analyzing disturbances such as blackouts and can alert engineers to risks of blackouts and other problems so that appropriate control actions can be taken in time.

For the demonstration, the researchers set up a testbed in which Synchophasors could be processed and analyzed using a distributed architecture linking the data to on-demand, provisioned virtual computing resources in remote locations. The demonstration first collected high-resolution, simulated PMU data from Chakrabortty’s lab in the FREEDM Systems Center. It then used the Breakable Experimental Network (BEN), the RENCI-developed experimental fiber optic network that connects RENCI, UNC-Chapel Hill, Duke University and NC State, to connect to high-speed networking and cloud computing resources available at sites involved in the National Science Foundation’s Global Environment for Network Innovations (GENI) initiative. Using a networked resource control framework developed by RENCI and Duke researchers, the demonstration provisioned a slice of virtual machines (VMs) and bandwidth-guaranteed virtual network links to the PMUs. The VMs then ran algorithms developed by Chakrabortty’s team to analyze and visualize the PMU data in real time.

“What we are showing is how processing and analyzing power system data can be done using a distributed architecture instead of traditional centralized methods,” said Chakrabortty. “In fact, as the number of PMUs in the North American grid grows exponentially over the next five years, such a distributed data processing architecture will become imperative for both monitoring and control. Our test bed integrates power grid models and the GENI communication infrastructure on top of each other, thereby forming a perfect cyber-physical platform that can be used for testing these distributed algorithms.

“Moreover,” he continued,  “the network here isn’t just a pipeline for transmitting data; it becomes an on-demand integrated system for communication, computing, analysis, and storage. It is a less expensive, more agile method for doing wide-area monitoring and control. It can also be used to test critical applications such as cyber-security.”

Over the past year, RENCI has worked with Chakrabortty’s research group to expand his wide-area monitoring and control work from a simulated system housed within the FREEDM Systems Center into a next-generation distributed system project using BEN and GENI resource providers. The U.S. Department of Energy recently provided funding for a two-year project headed by Chakrabortty, which gives RENCI the chance to set up infrastructure as a service using the advanced networking and cloud computing framework and test bed it has developed with NSF funding. In the future, the team plans to develop a more advanced cyber-physical infrastructure that can monitor and control larger and more complicated power systems.