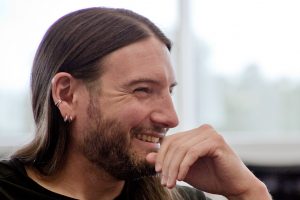 CHAPEL HILL, NC – The iRODS Consortium announced today that Jason Coposky, Chief Technologist for the consortium for the past two years, has been named Interim Executive Director.

In that role, he will lead efforts to implement iRODS software development strategies, build and nurture relationships with existing and potential consortium members, and serve as the chief spokesperson on iRODS development and strategies to the worldwide iRODS community. He replaces Dan Bedard who left the position at the end of April.

END_OF_DOCUMENT_TOKEN_TO_BE_REPLACED

In genomics and other medical fields, researchers are now able to capture and store large amounts of data from electronic medical records (EMRs). But while capturing massive amounts of medical data is becoming common, figuring out how to analyze, interpret and use it in ways that benefit the health of patients remains challenging.

To meet the needs of researchers and clinicians eager to translate data into better health outcomes, researchers at RENCI and the University of North Carolina School of Medicine developed a prototype Genomic Clinical Decision Support System (CDSS). The framework so far has been used in genomic research projects, such as NCGENES, a project led by the UNC genetics department to evaluate the use of whole exome sequencing as a diagnostic tool in clinical settings. However, the developers of the CDSS have conceptualized it to be used in other data-intensive medical fields, such as medical imaging. It is designed to provide clinicians with a dynamic visual snapshot of the genomic data most relevant to an individual patient and to capture, store, and curate more comprehensive genomic data so it can be easily accessed and used in future research and clinical practices.

END_OF_DOCUMENT_TOKEN_TO_BE_REPLACED

Launched in 2012, the effort to build HydroShare as an open source water science research and discovery environment means that researchers can now share data and models with colleagues nationwide. They can also access, visualize, and manipulate a broad set of hydrologic data types and models, and connect with data and models published by others.

END_OF_DOCUMENT_TOKEN_TO_BE_REPLACED 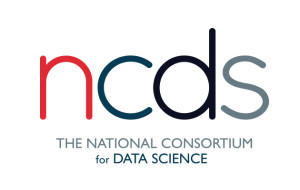 END_OF_DOCUMENT_TOKEN_TO_BE_REPLACED

SUNNYVALE, Calif., – April 26, 2016 – Panasas®, the leader in performance scale-out network-attached storage (NAS), today announced that it has joined the iRODS Consortium as a contributing member. The iRODS Consortium leads development and support of the Integrated Rule-Oriented Data System (iRODS), free open source software for data discovery, workflow automation, secure collaboration, and data virtualization. The consortium and the iRODS development team are located at the Renaissance Computing Institute (RENCI) at the University of North Carolina, Chapel Hill.

END_OF_DOCUMENT_TOKEN_TO_BE_REPLACED

SAN JOSE, Calif., April 4, 2016 /PRNewswire/ — Helping the world harness the power of data, Western Digital Corporation (NASDAQ: WDC) today announced that it is now an active contributor to iRODS, a membership-based consortium that develops and supports the integrated Rule-Oriented Data System (iRODS),  an open source software platform for storing, searching, and sharing large files and datasets. Thousands of organizations around the world use iRODS for flexible, policy-based management of files and metadata that span across diverse storage devices and locations. Western Digital Corporation will initially contribute advanced HGST S3 connector technology to the iRODS architecture to enhance cloud connectivity.

END_OF_DOCUMENT_TOKEN_TO_BE_REPLACED

iRODS set to make a splash at Bio-IT World conference

CHAPEL HILL, NC, April 4, 2016 – Attendees and media at this week’s Bio-IT World Conference and Expo in Boston will have plenty of opportunities to learn about iRODS, the integrated Rule Oriented Data System, and the iRODS Consortium, the membership organization that supports the development of iRODS as free open source software for data discovery, workflow automation, secure collaboration, and data virtualization.

END_OF_DOCUMENT_TOKEN_TO_BE_REPLACED

iRODS users come together for annual meeting in June

Users of the integrated Rule Oriented Data System (iRODS) from around the globe will gather in Chapel Hill in June to discuss iRODS-enabled applications and discoveries, technologies powered by iRODS, and the future of iRODS and the iRODS Consortium.

The week of activities begins Tuesday, June 7 with one-day workshops aimed at beginner and advanced iRODS users. The iRODS User Group Meeting (UGM) will follow on June 8 and 9. Registration for both the workshops and the UGM runs through May 27 and early bird discounts are available through April 22.  Participants can register for both the UGM and a workshop or the UGM only. To register visit http://irods.org/ugm2016/.

END_OF_DOCUMENT_TOKEN_TO_BE_REPLACED

The scarcity of female and minority computer scientists and software engineers is a well-documented gender, racial, and economic issue. Already, there are more tech jobs than computer science graduates to fill them, and a 2014 White House report predicts that by 2020, more than 1 million software engineering jobs will go unfilled. Yet, the number of women earning computer science degrees dropped by 10 percent in the first decade of the 21st century, according to the National Science Foundation. 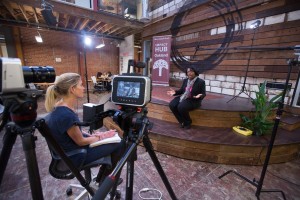 The film CODE: Debugging the Gender Gap examines why girls and people of color are not seeking educational opportunities in computer science and explains how cultural mindsets, stereotypes, educational hurdles, unconscious biases, and sexism play a role in this national crisis.

END_OF_DOCUMENT_TOKEN_TO_BE_REPLACED

The Internet of Samples aims to break down research barriers

The Internet of Things may be all the rage, but a group of scientists that met recently at the Renaissance Computing Institute (RENCI) wants to add the Internet of Samples (iSamples) to your radar. 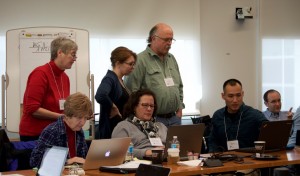 A multidisciplinary group of scientists and researchers brainstorm potential elements of the iSamples action plan for the coming year.

Across the world, scientists engage in research that requires them to collect physical samples, which are often unique and difficult to acquire. Think of samples from the moon, core samples of the Earth, or those collected by submersibles sent to the depths of the ocean.