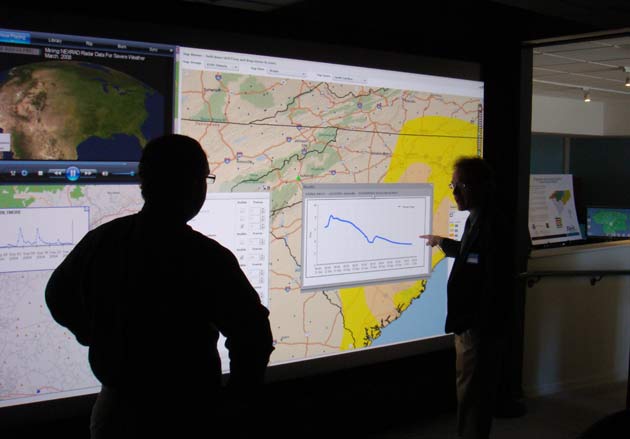 Demonstrations on the 20-foot visualization wall were featured at the opening of RENCI’s new downtown Asheville center.

ASHEVILLE, NC — Community and university leaders celebrated the opening of the new downtown location of RENCI at UNC Asheville on Oct. 1. The event featured a ceremonial ribbon cutting and messages of support for the Asheville center from Erskine Bowles, president of the University of North Carolina System, UNC Asheville Chancellor Anne Ponder and Asheville Mayor Terry Bellamy.

RENCI at UNC Asheville is a university, government and private sector partnership and was the first RENCI engagement center to open outside the Triangle area. For the last three years, the center has operated out of space at the Enka campus of Asheville-Buncombe Community College. The new site puts RENCI in the historic Grove Arcade in downtown Asheville and within easy walking distance of community and business leaders and researchers at the National Climate Data Center, part of the National Oceanic and Atmospheric Administration.

The city of Asheville agreed to pay the rent for the downtown space in appreciation of the collaborations the site will foster among area businesses, government, and federal and university researchers.

An open house, which followed the grand opening ceremony, featured demonstrations of work being done at the Asheville center, including computer modeling to understand the effects of floods and landslides in the region and computer tools for mapping natural hazard risks for emergency officials responding to floods, landslides, wildfire and other threats around Buncombe County. 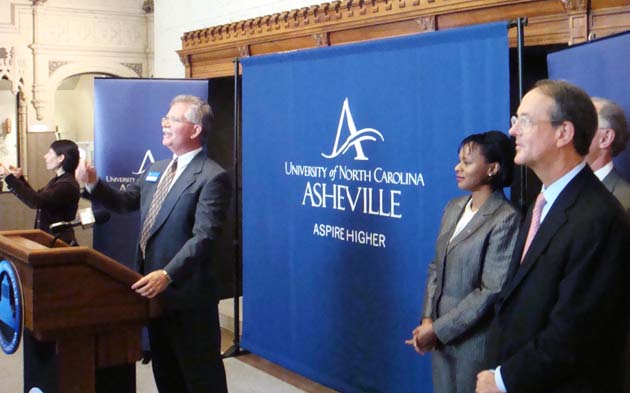 Bowles said the RENCI center is an example of what the university system and the city can do if they leverage their resources and work together.

“You can use the analytical tools that we have here as a catalyst for decision makers to help them find the balance between economic growth and preserving the natural beauty that we have here,” he said.

RENCI Director Stan Ahalt attended the grand opening as part of his first week on the job.

“This engagement center clearly exemplifies why I took the job at RENCI,” said Ahalt. “This is a marvelous example of how the excellent research, the excellent science and the excellent knowledge developed at our university can be transferred into real impact for North Carolina.”

The Urban Growth Model, a tool created at RENCI at UNC Charlotte that shows urban development patterns over 30 years, was one of many ongoing projects on display. The model originally depicted growth in the Charlotte region but has been expanded to western North Carolina through funding from the city of Asheville and the U.S. Forest Service.

On the center’s 20-foot visualization wall, RENCI’s Jeffrey Hicks offered a close-up look at recent flooding in western North Carolina with live feeds from rain and stream gauges and a look at the persistent drought conditions in the eastern part of the state.

The center’s portable dome showed a computer simulation of flooding along the Swannanoa River and the RENCI ROVER (RENCI Outreach Vehicle for Education and Research) stood curbside, demonstrating hands-on curricula offered to youngsters through a partnership involving RENCI, the North Carolina Arboretum and other educational outreach organizations.